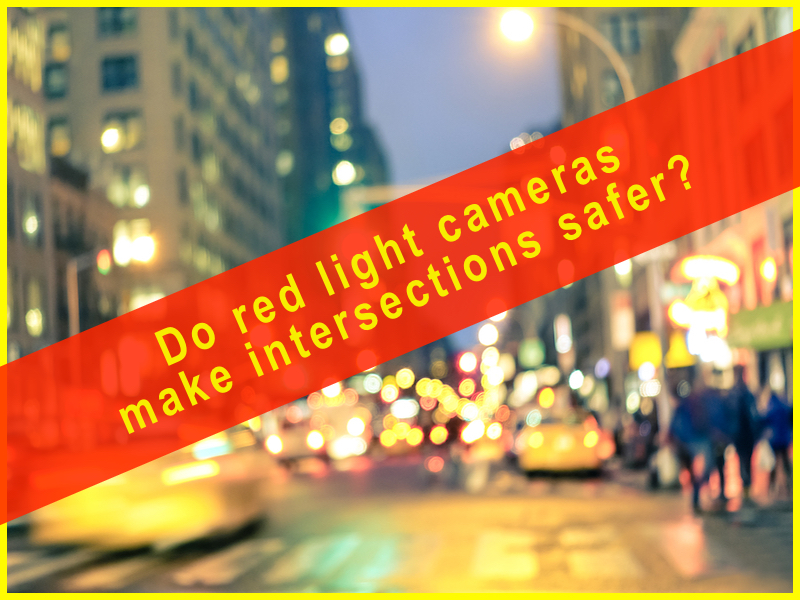 Drivers who run red lights are responsible for over 700 deaths each year. Insurance Institute for Highway Safety

A driver who runs a red risks their own safety as well as other people in the intersection. This includes people on foot, motorcycles, bicycles, and in other cars. According to the Insurance Institute for Highway Safety (IIHS), over half the victims killed in crashes caused by red-light runners were not in the violator’s vehicle.

Many cities have adopted red light cameras in attempts to reduce red light accidents. If a driver runs a red, it triggers the device to record a picture and video using radar. Then the driver is sent a ticket in the mail.

The Netherlands were the first country to install red light cameras at some of their intersections. They weren’t used in the US until New York City adopted them in 1993.

There is no definitive answer. Of course, the private companies that make millions off the systems validate their safety. Some studies have revealed a decrease in accidents at intersections with cameras and even a “spillover” effect of safer no-camera intersections nearby. Yet opponents argue that they are simply a revenue generator with no real benefits. Drivers hate them so much that some political candidates have promised to end intersection camera policing as a major pillar of their campaign.

It was discovered that a red light camera company had shortened yellow light duration in Chicago. This turned out to be a dangerous combination. Since drivers were afraid of getting tickets, they began stopping more abruptly when the light turned yellow. Many Chicagoans say this increased rear-end collisions. One driver who protested a citation discovered that the city required yellow lights to be at least three seconds. Judges threw thousands of tickets out where the video showed that the yellow light was less than three seconds. http://www.chicagotribune.com/news/ct-red-light-camera-yellow-timing-20141009-story.html

Getting Rid of Cameras

Miami recently stopped using red light cameras it had been using since 2010. City commissioners—who voted unanimously to discontinue the program—said the expensive citations posed an undue financial burden on drivers.

Victim advocates disagreed with the decision as did Miami’s police union. The union pointed out that they use the photos and videos in crime investigations.

Miami will miss out on a lot of revenue. It was on track to receive $10.5 million dollars in fines this year. The company who owns and operates the cameras would have received about 40% of that total. http://www.miamiherald.com/news/local/community/miami-dade/article189812879.html

Do you believe that red light camera enforcement makes communities safer? The auto service team at Richins Car ProfessionalService would love to hear what you think. Leave a comment below.